International Contribution Through The Discovery of an Anti-Infection Agent

Prof. Satoshi Omura, inaugural Director of the Kitasato Institute for Life Sciences and Professor Emeritus of Kitasato University, has discovered over 400 novel bioactive compounds from microorganisms, devising innovative methods of isolation and cultivation in the process. Many have been developed as highly-effective drugs, human and veterinary medicines, as pesticides and agrochemicals, or used as important reagents in biochemical research to help elucidate various biological phenomena.

In 1979, through a collaborative research project he established with the US-based private sector pharmaceutical company, Merck & Co., Inc., Prof. Omura discovered the world’s first ‘endectocide’, the novel and extremely effective anti-nematocidal compound, avermectin (isolated from the actinomycete, Streptomyces avermectinius, found in a soil sample collected at Kawana, Shizuoka Prefecture). Ivermectin, a dihydro-derivative of avermectin, is widely used around the world as an anthelmintic drug for animals and as a drug indicated for filarial diseases, strongyloidiasis and scabies in humans. Of greatest significance, ivermectin is being used as the mainstay of global campaigns to eliminate onchocerciasis and lymphatic filariasis (LF), two of the world’s most disfiguring and devastating tropical diseases. Donation of the drug by Merck & Co., Inc., with the support of the Kitasato Institute, has allowed the World Health Organization (WHO) and a large, innovative and interdisciplinary group of international partners from various sectors to distribute it free for as long as it is required to combat onchocerciasis and LF where the two diseases co-exist, mostly in Africa and Latin America. As well as maintaining its 25-year status as a globally-leading commercial animal health drug, ivermectin is being administered free to well over 70 million people annually. Using ivermectin as the key weapon, the WHO aims to eliminate both onchocerciasis and lymphatic filariasis as global public health problems by 2025, freeing billions of predominantly poverty-stricken people from the ravages of the diseases. 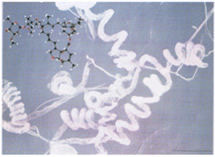 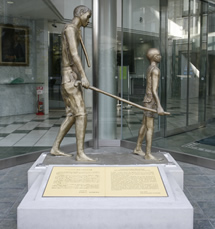 北里生命科学研究所棟前の像はエーバーメクチン発見25周年を記念して、ブルキナファソに建てられている像を現地の芸術家が再現して作成したものでオンコセルカ症の大人を杖で引いて歩く子供の像です。
A child using a cane to guide an adult who was been blinded by onchocerciasis, previously a common scene throughout Africa. These bronze figures, which stand in front of the Kitasato Institute for Life Sciences, are a replica of an iconic sculpture sited at the HQ of the African Programme for Onchocerciasis Control in Burkina Faso. The statue was erected at the Kitasato Institute origin of Avermectin to commemorate the 25th anniversary of its discovery. 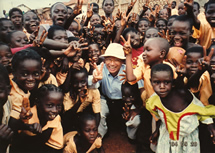 アフリカ視察中の大村博士、オンコセルカ症の恐怖から解き放たれた純粋な瞳の子供たちに囲まれて。
Prof. Omura during a tour of onchocerciasis-endemic areas in Africa, surrounded by children who received him with broad smiles, having been relieved of the risk of onchocerciasis thanks to his innovative research work, insight and humanitarian concern.